Viral Theory is just a theory. There is not one single person on this earth that can produce a single virus “cell” for reproducible infectious studies. If this is news to you, you may already be reaching for the little X in the corner that will close this page. Hang around, because the following theory is a damn sight more interesting than the phantasmagorical nonsense parroted by doctors who get kickbacks from Pharmafia for every prescription of poisonous dreck they issue to ‘treat’ pathogens they cannot physically produce.

The virus guys cannot show you a single, separated and replicated virus cell, because it would “divulge trade secrets”. Or they point at a Petri dish full of cancer cells and say: “Look, we are breeding millions of viruses, see, science!” Do not, however, ask them to take a virus out there and show it to you. They say they infer the existence of the virus by the damage it does to its host. Even the covidiot sciencers complained about the challenges of designing a vaccine “in the absence of a physical sample” of the computer-generated, computer-designed, computer-displayed SARS-COV-2-dash-werallgonnadynao killer virus.

“Oh, but, but viruses are real tiny, you can’t see them with a microscope even.” We now have microscopes that can see the gap between atoms, and yet, the best photograph of a virus they can produce, is something like this:

The above picture was captioned as a bacteriophage, and described as “a virus that infects bacteria”. As the name indicates, it is actually a ‘bacteria-eater’ which is produced by all higher life forms as part of their immune system. A variety of these creatures are in your body right now, going around the system, attacking and devouring pathogens and infected cells, hopefully before they can breed and make you sick. They sometimes go crazy and try rip pollutants out your cells, causing Hollywood-style accidental damage. They did not cause the pollution, they did not cause the ‘disease’.

Another kind of picture often used to “prove” the existence of viruses, is the type showing exosomes on a cell. Exosomes are little bags made of fat, called Vacuoles. They enclose dead or diseased organelles, or any other debris found inside a living cell. These potentially dangerous fragments are collected by moving proteins living in each cell, and shoved into the vacuole, containing a fluid with higher acidity than the cell in general, which kills or immobilises most pathogens. This little bag of rubbish is then pushed out through the cell wall, to be disposed of by phages such as above, or filtered by lymph nodes, kidneys, liver etc. The genetic waste material inside these exosome bubbles, is taken to be some viral genome, while the fatty container is called a “viral envelope” giving rise to a specific class of virus, the “enveloped virus”. The phage we met earlier, having no fatty layer, is classified as a “naked virus”. 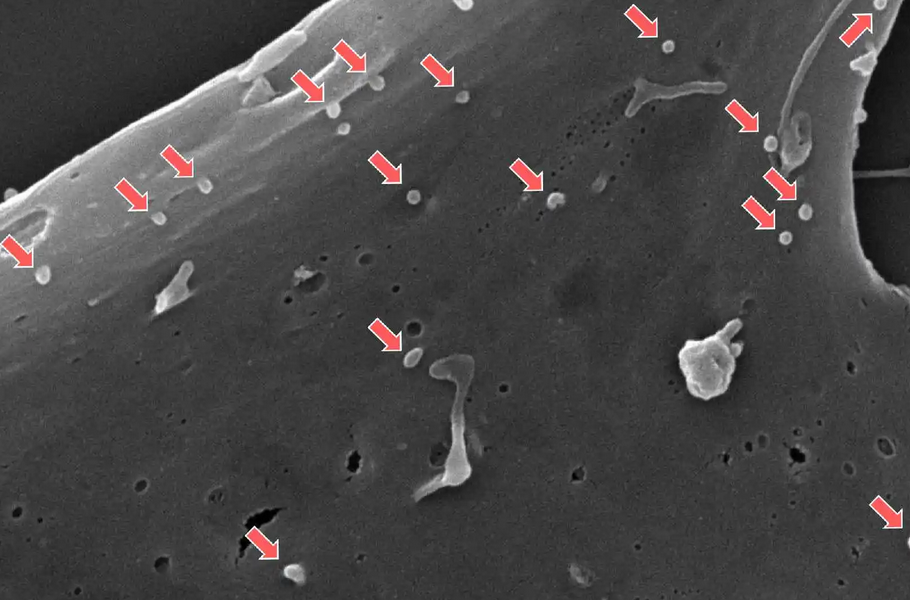 Microphoto of exosomes on a cell wall. This author contends that damage caused by some specific toxin will express specific exosomes, therefor different people exposed to the same environmental poison, will express similar exosomes containing the same waste. Specifics in individual bodies may cause some slight change in the chemistry of this waste, giving rise to the virologists ‘discovering a new mutated strain’. OhMyGodiCron Beta 2/Delta, here we come.

Ever heard of the Rosenau experiment? Way back when Baal Gates’ Grampappy Fred was running the viral scam for Rothschild, causing the vaccine-derived Spanish “Flu” in 1918, a Doctor Rosenau used military prisoners as ‘test subjects’. He exposed healthy soldiers to ill ones. Smeared them with snot. He ended up injecting snot into their veins, and still no proof of transmission. This confirmed earlier experiments on horses. Exosomes are already dead, killed by acid. To replicate the symptoms, you have to administer the original poison.

But transmission has been demonstrated. Sort of. Tom Bearden cites the case of the Death Ray. It was demonstrated that a diseased, dying leaf, when brought next a fresh healthy leaf, will cause the healthy leaf to wither quicker than usual. Putting the two leaves in separate containers stops this effect, provided the containers are made of a material impervious to short wavelengths beyond the ultraviolet range.

But people call Colonel Bearden a crackpot, so, for a theory on viral transmission, we shall rely on Professors Rupert Sheldrake and Luc Montagnier. But that is another article... You gotta see that stuff, science is asking us new questions, and the answers are not comfortable.

The way Home to here:

THE BOOK OF HERBS

Buy This, Own That.